How to Get Laid in Las Terrenas, Dominican Republic – City Guide

If you’re curious how to get laid in Las Terrenas, Dominican Republic – you’ve come to the right place. I won’t sugarcoat things, though. This is not the best city in the Dominican Republic for getting laid – if you don’t want to pay.

Hundreds of old Italian men live in Las Terrenas almost year around. The city has become a sex tourism hotspot for old men looking to pay teenage Dominican and Haitian girls. That hinders the reputation of all traveling foreigners here, but it can still be done.

You just need to know where to look. If you look in the right places, you can find some stunning Las Terrenas girls while enjoying some of the best beaches in the whole world. Las Terrenas has a lot to offer traveling men, but sometimes it’s better to bring sand to the beach.

How Easy Are Las Terrenas Girls: 3/5

I’m not going to lie and say the girls in Las Terrenas are some of the best looking on the island. They simply aren’t. Plus, most of the girls you’ll see as a tourist are going to be working. I can’t harp on this enough.

The women in Las Terrenas generally look a little darker than you’d expect in a place like Santiago de Los Caballeros. There’s also a good amount of Haitians around, so that could play a role here, too.

Bodies are somewhat average for a beach city. I saw way hotter women during my time in Punta Cana, Puerto Plata, and Sosua. Most of the girls here are a bit poorer and simply don’t make enough money to take great care of themselves.

Still, there’s a small middle-class in Las Terrenas that makes money off tourism. I’d suggest targeting these girls. You should also target upper-class Dominicans who come to Las Terrenas on vacation. Some of these girls are sexy as hell.

Where to Stay in Las Terrenas, Dominican Republic?

Las Terrenas isn’t a big town at all. There’s no real bad area to stay. If you want to stay in an optimal place, I’d recommend staying as close to Gaia Disco as possible. This location offers easy access to a number of bars and clubs.

Staying anywhere in this photo would be ideal:

Sex in Las Terrenas: Is It Difficult?

Yes, it is. Getting sex in Las Terrenas without paying for it is pretty hard. The girls here tend to be poor and they have bills to pay. Lots of them turn to whoring to make ends meet. That’s just how things go in Las Terrenas.

Your best chance to get laid in Las Terrenas is through online dating and meeting girls on vacation at the bars in high season. The local Las Terrenas girls are often working girls. If they’re not, they don’t have much interest in a guy who is in town for a few days or a week.

Your best bet is honestly bringing a girl from Santiago or Santo Domingo with you. You’ll get to enjoy the beaches and still have sex in Las Terrenas. While this might not be ideal, it’s probably the best plan of action here.

How to Get Laid in Las Terrenas

Now, you’re here because you want to know how to get laid in Las Terrenas. While that’s not easy, I found a few methods during my time in the small town. Here’s how to meet women in Las Terrenas without paying them:

I wouldn’t recommend this. If you see a cute girl at the gym or on the beach, feel free to chat her up. Actually, there are some decent opportunities at the beach here. Outside of the beach areas, I wouldn’t say there are any day game spots. Not a reliable source of women in Las Terrenas.

Still, it’s fun to party around the beach. The atmosphere here is relaxed and the vibe is fun, albeit a bit urban at times. Here are a few spots to check out if you want to meet some Las Terrenas girls or tourists:

Overall, just go down to Pueblo de Los Pescadores on a Friday or Saturday and see what’s going on. You could get lucky and find some rich Dominican girls on vacation – which would be a jackpot.

If you plan to meet Las Terrenas girls without paying for it, then you’ll absolutely need to speak some Spanish. If you don’t speak Spanish, you’ll be lumped into the category with all the other tourists – potential client.

For those who speak nothing, start by learning with Rocket Spanish. The program will have you speaking Spanish and having conversations in under three months!

If you can speak a little Spanish, but want to learn how to flirt with Dominicanas – then you need Pickup Spanish. The program will teach you how to speak Spanish in a smooth, sexy way that’ll ensure you get laid in Las Terrenas. 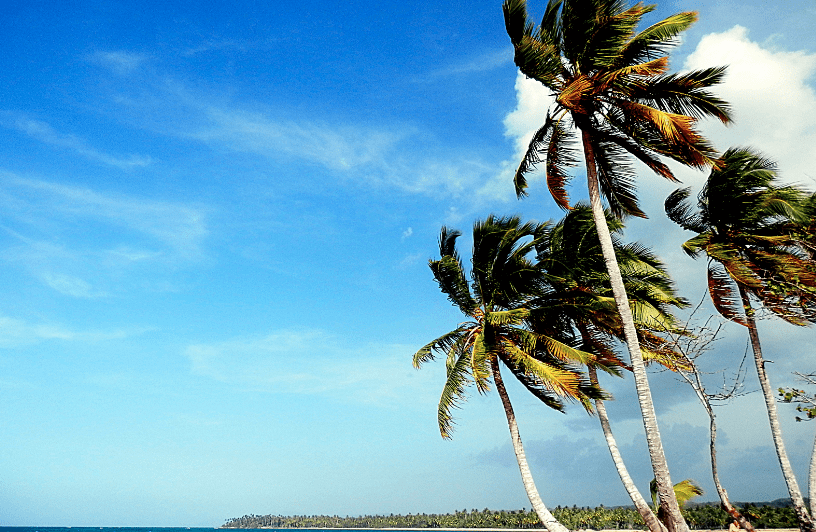 How to Meet Las Terrenas Girls – Your Detailed City Guide

How to get laid in Las Terrenas? I hate to say it, but things won’t be easy. This is a small town where a lot of old Europeans go to pay for sex with teenage girls. Certainly not judging, but that’s not the best place for single foreigners looking to get laid. The dynamics just don’t add up well.